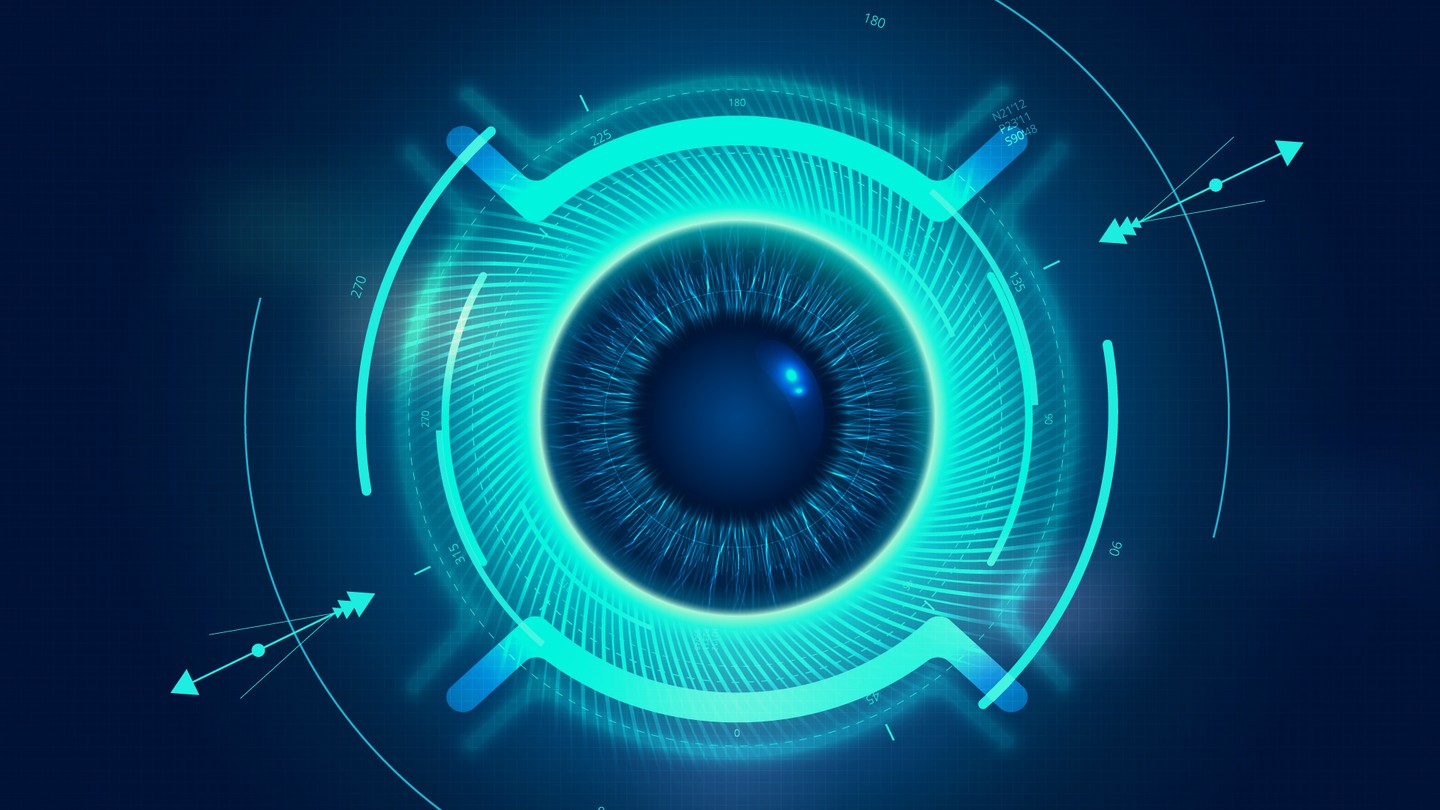 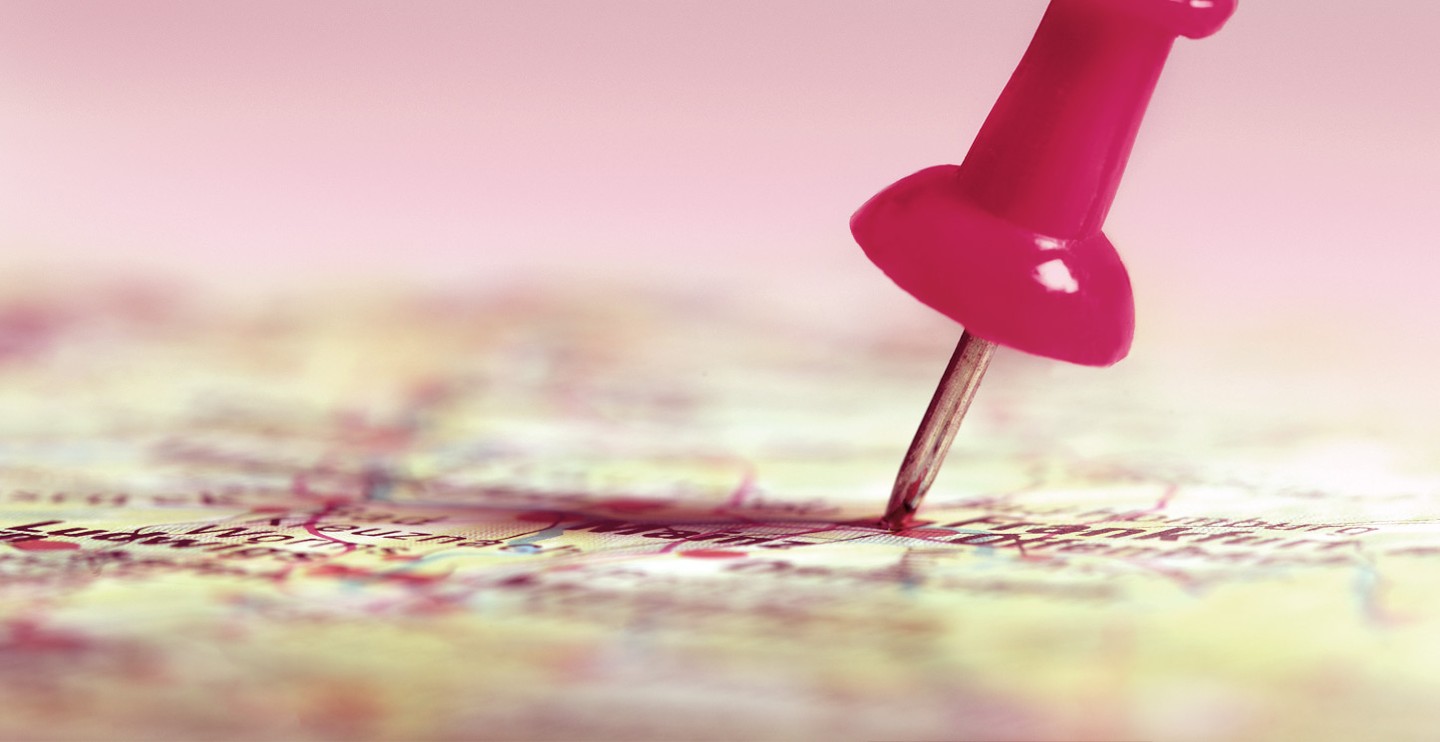 What is the performance cost of using a cloud-based comment system for your blog ?
Blog post
Recent

I was lucky enough to get the new 2013 high-end Macbook Pro Retina (15) yesterday and started wondering about how it compares to the mid-2012 Retina (15) model. On a personal level, Im also pretty interested in how its gaming performance compares with its predecessors. Since no one has, at least so far, published benchmarks comparing the real-world performance of the integrated graphics chip (Iris Pro) vs the discrete one (NVIDIA GeForce 750M), I thought Id run a few to help people decide if they need the integrated one. The bottom line: the integrated GPU does a good job for everything but gaming. Don’t let the synthetic benchmarks fool you: as we will see on Starcraft 2, the Nvidia is almost 50% faster. Overall the new Macbook Pro with its gorgeous screen and good graphic cards is an excellent gaming laptop (but, alas, a little bit pricey).

The first benchmark I ran is the well-known Heaven benchmark in extreme settings. I asked a friend to run it on his Macbook Pro Retina (15) first generation (2.3GHz Intel Core i7) to get a comparison point. He bought his laptop, equipped with the NVIDIA GeForce GT 650M and Intel HD Graphics 4000 graphics card, in mid-2012. As visible on the chart below, on this benchmark the Iris Pro does a good job and is only 33% slower than the GeForce 750m. Both my laptop and his laptop have 16 GB of RAM, though hes running OS X 10.7.5. The new version is twice as fast as the first generation: the integrated GPU (Iris Pro vs HD 4000) is 52% faster. Surprisingly, the integrated GPU of the new version is slower than the first version. This is probably due to a driver issue. 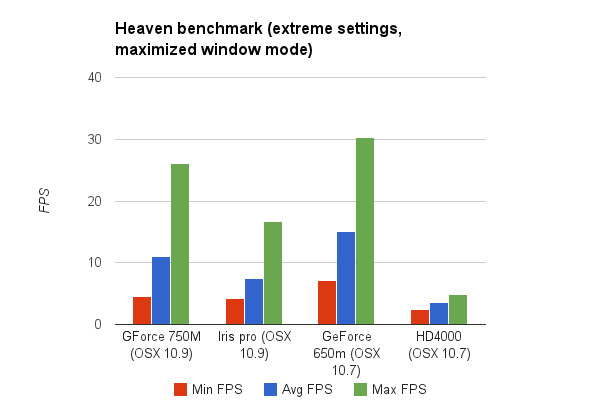 I quickly ran a Starcraft 2 benchmark on the new Macbook Pro with the integrated and the discrete GPU. As visible on the chart below this time the 750m is 44% faster than the Iris pro. This tend to confirm that there are probably some issues with the driver. My friend don’t have Starcraft 2 so we can’t compare with the previous generation.  As requested in the comments, I re ran SC2 in lower settings. As visible in the chart below the improvement is not as drastic but we are still looking at roughly 33% improvements. Note that these measures are made at the beginning of the game so they dont reflect the frame-rate you observe during the end-game big battles.  In high settings, while playing a few 4vs4, I did observed a few drastic drops which pushed me to revert to medium. 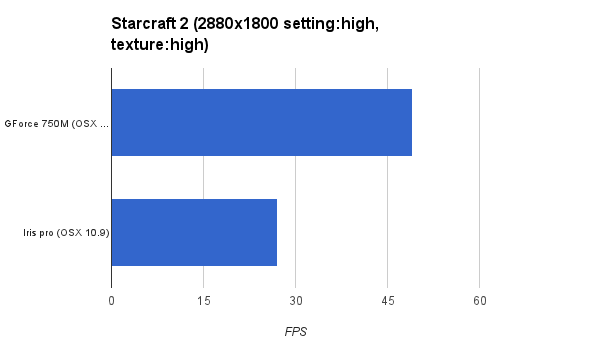 Overall, the new Macbook Pro at equivalent CPU frequency is somewhere between 15% to 18% faster on browsers benchmark, as visible on the charts below. That is a nice boost but it does not warrant an upgrade if youre solely interested in browsing the web and doing lightweight work. The battery life upgrade is probably a more compelling argument for this type of use, but I didn’t get a chance to test this and left it to the pros. 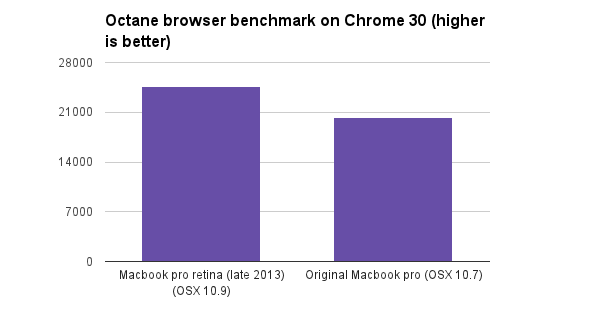 I got many requests about the power consumption of the IRIS vs the Geforce 750m so I re-ran the heaven benchmark and looked at the sensors data via iStats.  Here are the answers to your questions:

Is the Nvidia GPU drain battery when the mac is forced to only use the Iris Pro? No it does not. As you can see on the screenshot below the GPU vCore is 0.0V so there is not power leakage (at least as reported by the sensors). 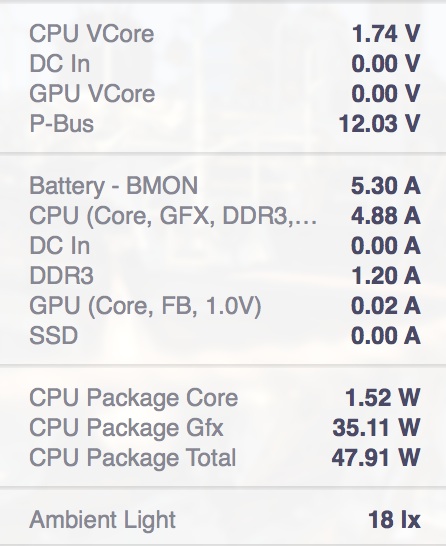 How much power the Iris Pro consume ?

When Idling the CPU Package Gfx (the Iris) consumption  is ~0.24W. When running at fully capacity the Iris consume ~35W which is about what the NVidia max power consumption is as well according to GpuZoo. I have no idea how much the GeForce consume, exactly. If we assume that the Voltage and the Amperage are correctly report (0.84V, 0.25A),  the GeForce consume about the same as the Iris idle (but I am really not sure it is accurate) so take this with a grain of salt.

A question I got in the comments was is there a difference in term of temperature when running with the Iris vs the 750m. To try to answer this question, I ran the heaven benchmark (again!) for 15 minutes to see how hot the mac will be. I let about 9h so the first run dont affect the second one. To establish a baseline, I reported the sensors temperatures when the computer is idle in column 1. As visible on the last column the CPU and the right side of the Mac is cooler when the 750M is used which is not surprising as the GPU is located on the upper-left.  The CPU is also a little cooler. On the other hand when the Iris is used the upper left is significantly less hot. Overall I dont feel there is a clear winner in term of heat which is expected as both GPU draw about the same amount of power (~35W). However the heat seems more spread out when the Iris is used vs when the 750m is used.

The new generation is a worthy upgrade from the first generation, especially if you are a gamer. When deciding between the high-end and the normal version, there isn’t much reason to opt for the high-end unless you are interested in gaming or want more storage/ram. While this is just a first impression, so far I didn’t find much reason to use the discrete GPU unless I play the Iris Pro does a good job for everyday tasks. This why when not playing, I am disabling the discrete GPU thanks to a nifty little tool called gfxCardStatus that you get from: http://gfx.io/ This helps save battery life and reduce heat. If you want me to run additional tests, let me know.