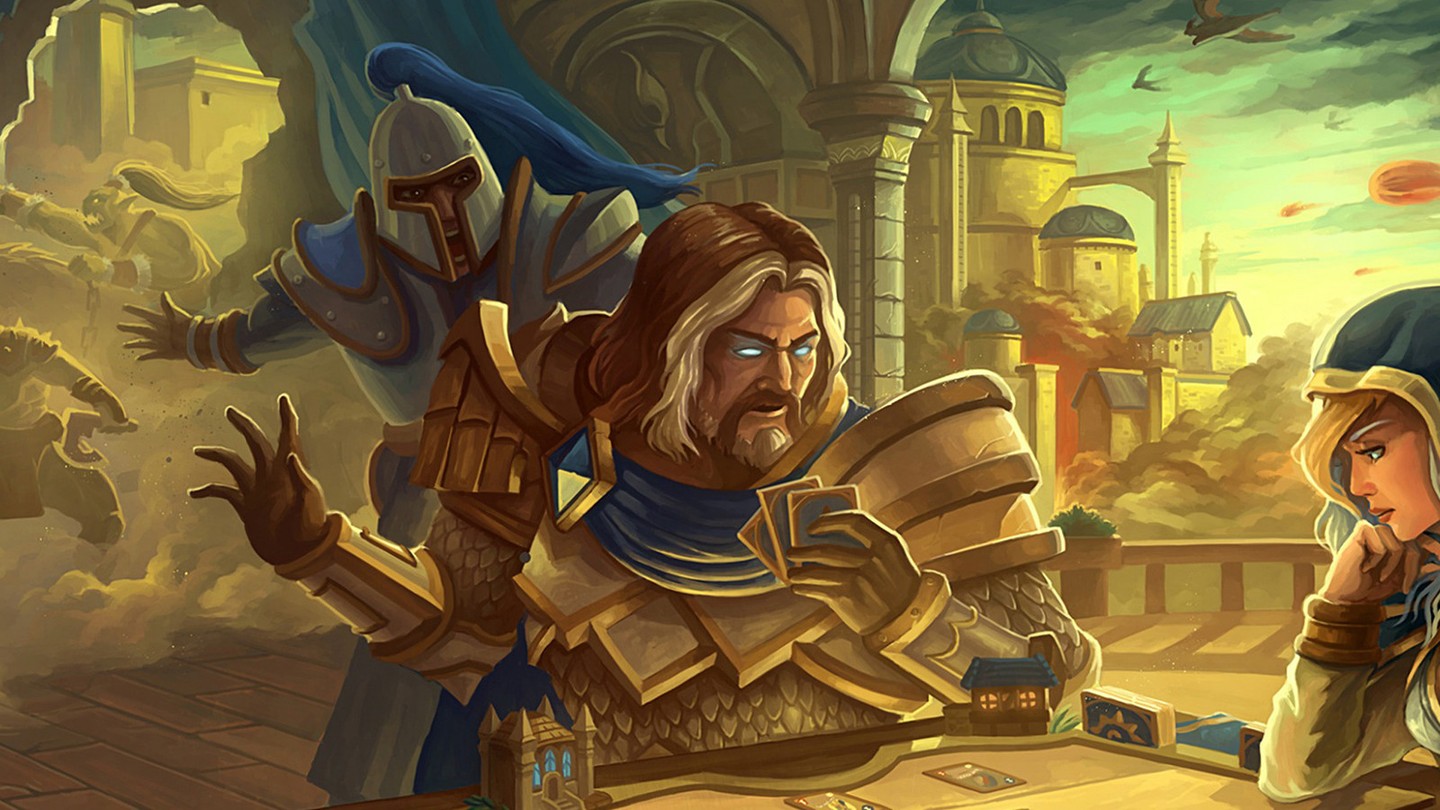 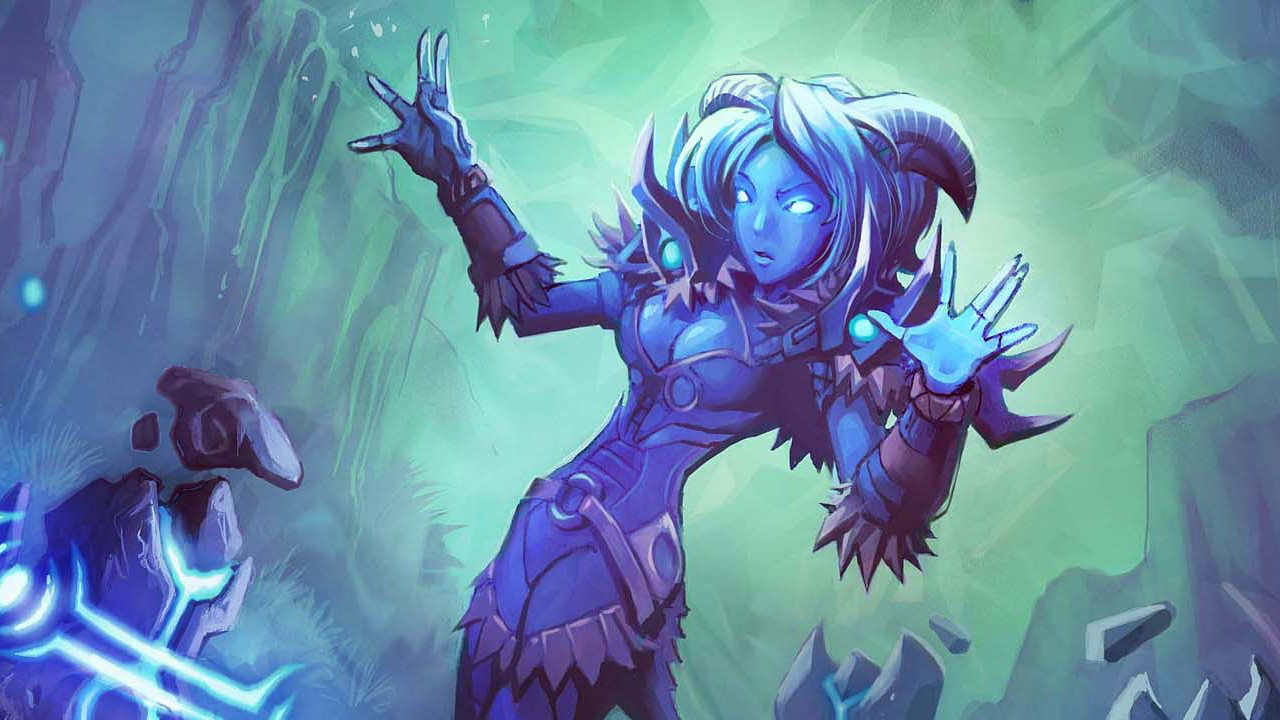 I am a legend: Hacking Hearthstone with machine-learning Defcon talk wrap-up
Blog post 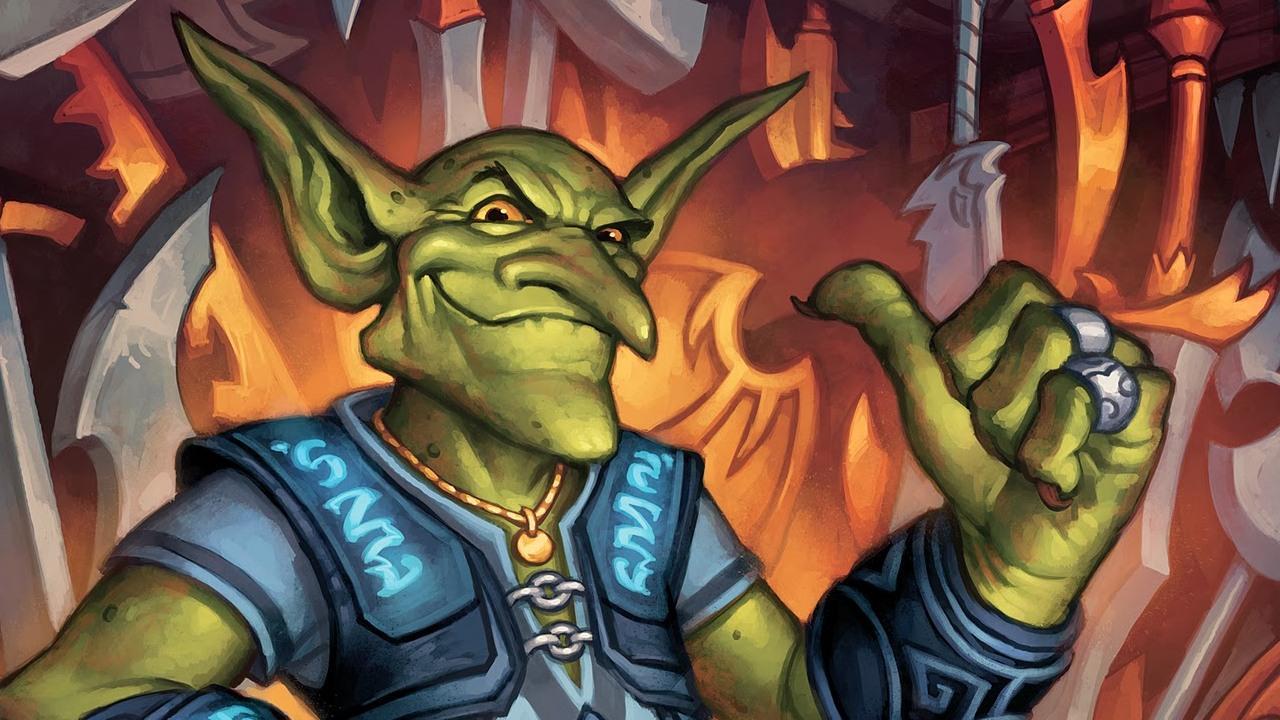 In this post, we explore how a Hearthstone player can predict which cards their opponent may play in future turns using machine learning.

At first, this might seem an impossible task because Hearthstone has a card pool of over a thousand cards, which can be combined into an almost infinite number of decks. However, as we will see, with the help of a lot of game replays, our algorithm is able to make accurate predictions because most players, for efficiency, use minor variations of the same deck archetypes.

At its peak, between turns three and five of a game, our algorithm is able to predict the most probable future card with an accuracy above 95%. Here is a demo of the algorithm in action:

Following the original release of this post in 2014, I had a few conversations with the developers of Hearthstone, who called this algorithm "game-breaking". Following their request, I agreed not to release the tool or the data to avoid spoiling the game (more details here).

A more “scientific” treatment of the main results described in this blog post is published in this research paper.

This blog post is part of my series of blog posts about applying machine learning to Hearthstone. Here is the list of posts:

Disclaimer: The analysis was done using replays from 2014. That being said, the results still apply today, as the core mechanics of the game haven't changed. For the same reason, the analysis should work for any card collecting game.

Last edit This post was last edited in October 2016. The introduction was fully rewritten to reflect the current state of the research. To make the post clearer, the content was partially written and illustrations were added.

Why is Hearthstone predictable?

One of the appeals of Hearthstone is the diversity of playing styles: Players have at their disposal for building a deck over a thousand cards. In theory, this diversity allows the creation of an almost infinite number of decks.

However, in practice, the decks played have a lot of predictable structure due to the following reasons:

As a result, most decks played on ladders and tournaments gravitate toward the same deck archetypes with only slight variations (aka Teching). This makes Hearthstone’s decks both efficient and predictable.

How to exploit Hearthstone’s predictability

To predict what Hearthstone opponents have in their decks, we are going to write an algorithm designed to learn probable deck structures based on 50,000 game replays. Learning the underlying structure of the decks will be used to predict what cards are likely to be played next based on the cards already played.

One might think that a huge downside of this approach would be that it requires observing quite a few cards played in a game to make good predictions.

However, in practice, by turn two the algorithm already makes good predictions. It is able, for instance, to predict two cards that the opponent has in their deck but hasn't played yet, with a success rate of over 50% (66.3% for the first card and 44.1% for the second card).

If you ask the algorithm to predict 10 cards that the opponent has in their deck, it will get 23% of them right. This is fairly impressive given that these are predictions based on seeing only one or two played cards.

As the game progresses, the algorithm will get an even better sense of what the opponent is playing and the prediction accuracy will increase. The accuracy peaks between turns 3 and 5, where the algorithm is able to predict the most probable card the opponent has in their hand but hasn't played, with an accuracy above 95%.

Before delving into the results more, let's backtrack a little and look at how the algorithm works.

At a very high level, the algorithm we are developing needs to do two things:

In computer science jargon, we call such an algorithm a machine-learning ranking algorithm. 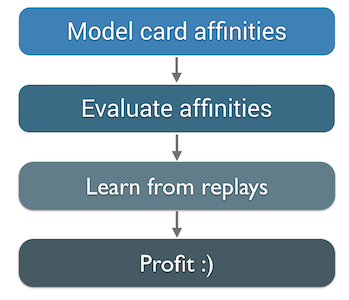 As visible in the diagram, to build our prediction algorithm we need to:

How can we model relationships between cards?

Modeling the relationships between the cards is the main difficulty we have to overcome in building our prediction algorithm. Finding the best way to represent which cards are usually played together is a delicate balancing act.

On one hand, you want to capture only meaningful relations to avoid making inaccurate prediction (aka "undercutting"). On the other hand, you don't want to be too strict (aka "overfitted") and be able to handle gracefully the slight variations between decks and the game’s inherent randomness due to the order in which cards are drawn and sequenced.

I will spare you my unsuccessful attempts with various models and focus on the one I ended up using: a variant of the n-gram representation. This model is probably the simplest representation you can use, but because of its simplicity it is also very robust.

That n-grams are the best representation is only half surprising since the method was developed by Shannon, one of the fathers of computer science, to predict elements of the English language based on statistical modeling and, therefore, it needed to be very robust.

The original paper on n-grams is called Prediction and Entropy of Printed English. It is one of the best papers I have ever read -- it is brilliant, understandable and inspiring. If you have any interest in computer science, I highly recommend that you read it. It is well worth it. 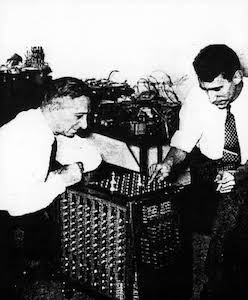 Amusingly, as visible in the photo, Shannon was also deeply interested in using algorithms to play board games. This led him to write a groundbreaking paper on artificial intelligence in 1950 on how to get computers to play chess.

Okay, enough history! Here is how n-grams work. An n-gram is a contiguous sequence of n items from a given sequence of items. In our case, the n-grams are sequences of cards. We usually work on sequences of two items ("bigrams") or three items ("trigrams"), though some algorithms use 5-grams or even more, especially for natural language processing. 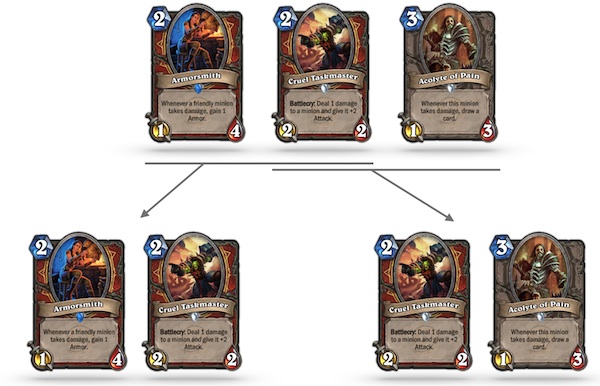 In our case, we will stick with bigrams and trigrams. Extracting the sequence of bigrams for a list of three played cards is illustrated above. As you can see, it generates two pairs of cards that were played consecutively. 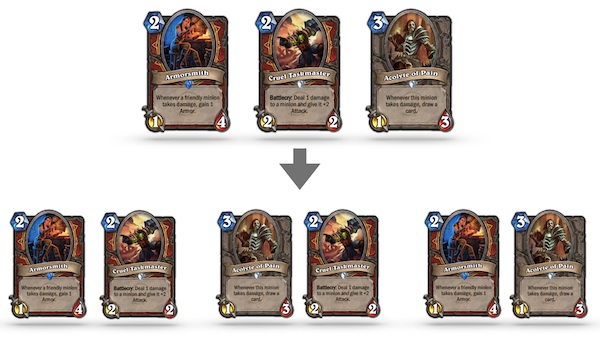 As mentioned earlier, we are going to use a slight variation of the traditional n-gram model, as we are going to extract a bag of bigrams and trigrams. As illustrated above, this means that instead of extracting only the pairs of cards that appear one after another, we will extract all possible pairs of cards regardless of their order. The reason for relaxing the contiguous constraint is twofold:

Then all those bags of bigrams and trigrams are summed, so that at the end of the training phase, the algorithm knows how often the cards in each pair or triple are played together. 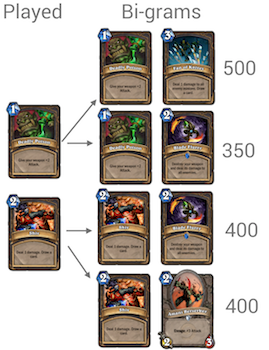 For example, as depicted in the figure above, the algorithm can learn that the combo Deadly poison/Fan of knives is a very popular Rogue combo as the two co-appear in 500 games.

How can we predict upcoming cards?

Now that our algorithm has learned the relationships between cards, to create our predictions we need to combine the frequency ranks. 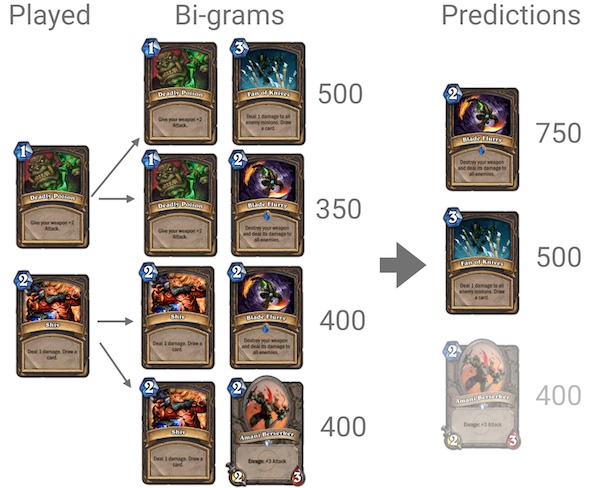 The easiest way to explain how we do this is with an example. Assume that our opponent, as shown in the figure above, has so far played the cards Deadly Poison and Shiv.

Next, the algorithm orders the cards by the count (step 3). It then simply returns the cards with the highest counts and excludes cards with a count that is too low (here, Amani Berserker).

Technically, we normalize (softmax) by the total count to display a percentage, but this does not change the core principle, so I removed that step from the diagram for clarity.

To work, our algorithm requires a lot of game replays. Experimenting with various dataset sizes, I started to get consistent results when using over 10,000 game replays. Moreover, using more than 50,000 games does not improve the results, so I settled for a dataset of 50,000 replays that were played between May and July 2014.

The main painful point at that stage was getting the replays and processing them. I converted them into a game structure, which told me what cards were played at which turn and by which player.

One caveat about the dataset: Because Blizzard does not offer a replay feature, the replays were directly collected from various players and, therefore, we don't know what cards the opponent drew. We only know what cards the opponent played. This not an issue, as it reflects the real game conditions under which we want the algorithm to operate, but it is worth mentioning.

I must confess here that it was not that simple. Inadvertently, I introduced a very subtle bug that made the algorithm behave erratically and under-perform, and it took me a while to find and fix it (it turns out that debugging machine learning algorithms is not that easy :)).

Anyway, once everything was working, I evaluated the accuracy of the algorithm by training it on 45,000 games, keeping 5,000 for testing.

The first way to evaluate the algorithm is to evaluate how often a card predicted to be in the opponent's deck ends up being played by the opponent at any later point in the game. 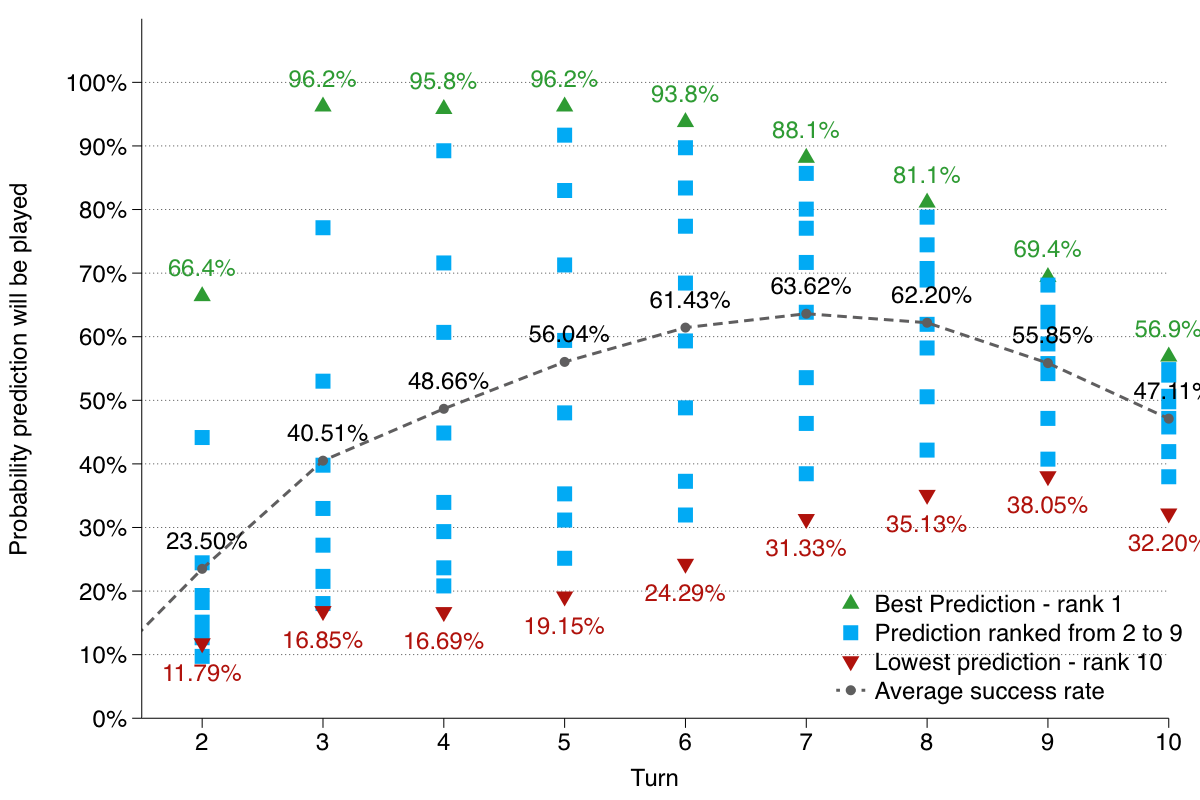 Looking at the graph above, we also observe that the ranking function performed as expected: the highest ranked card ended up being the card that was played the most often. Similarly, the lowest ranked card is the one that is the least often played.

Evolution over the turns

It is interesting to look at the trade-off between having more information as more cards are played and there being a smaller pool of cards to predict from as the number of cards in the opponent’s deck decreases. 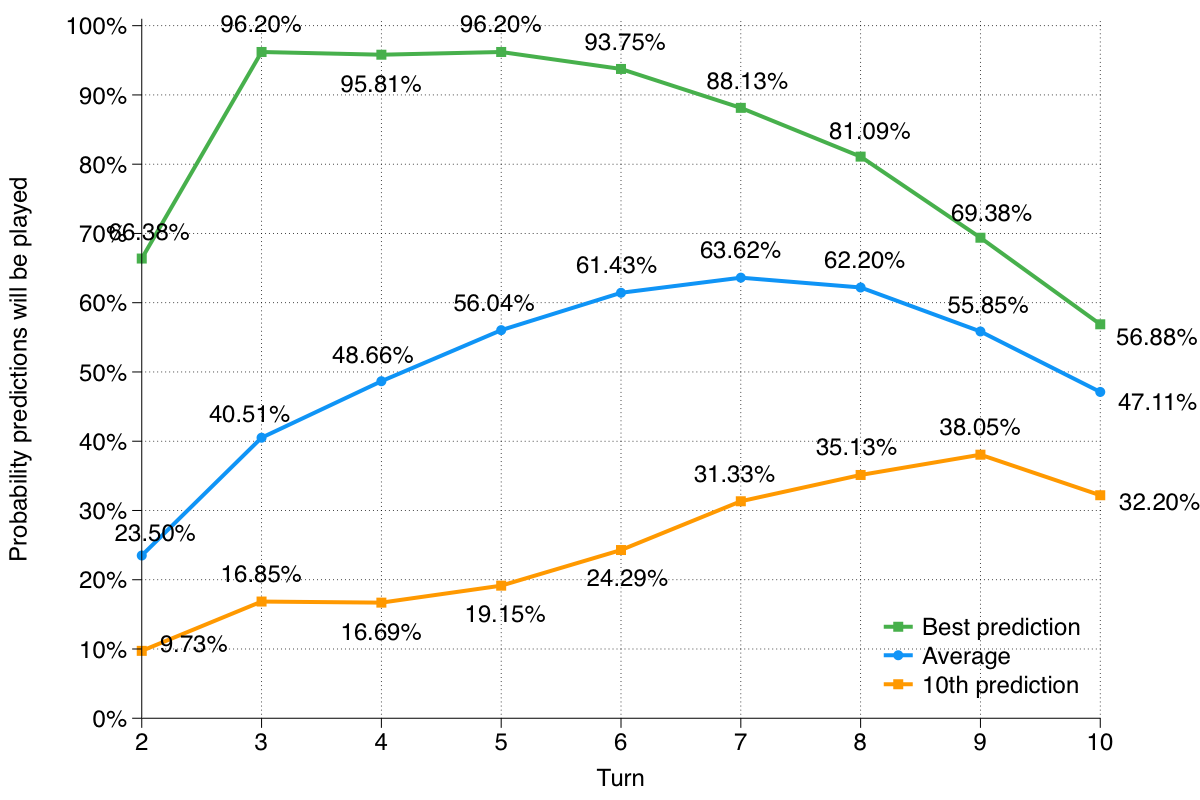 On the other hand, seeing more cards keeps increasing the average accuracy of the algorithm, till turn 9, since the predictions ranked between 2 and 10 becomes more accurate.

Let me wrap up this post by saying that I also experimented with larger n-grams like trigrams, but the results weren't as good, probably because they over-constrain the space.

The next post in this series tackles the problem of predicting game outcomes using machine learning.

You can also get the full posts directly in your inbox by subscribing to the mailing list or the RSS feed.